Heck Chicken Italia Sausages are brilliant. All their products are made by the Keeble family who makes their products in small batches from their farm in Yorkshire. It’s a brand that we’ve come to love and more importantly trust and they’re adding to their range… 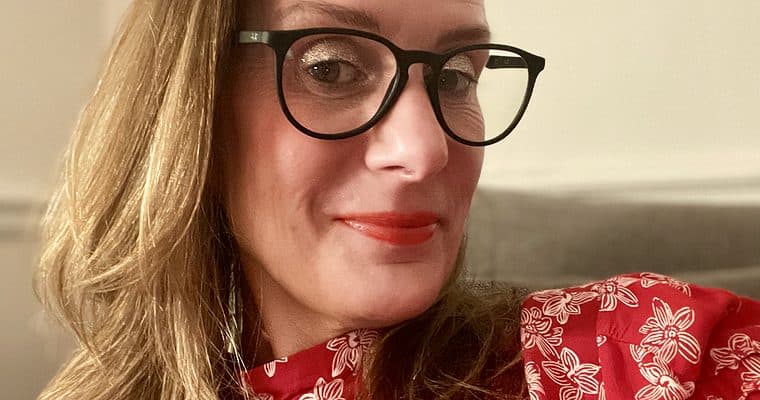 When I needed a day-to-evening dress for this year’s low-key office party, I hit the web in search of one.  I didn’t anticipate that I would hire rather than buy. Dress Hire My fascination with this ethical alternative to fast fashion came when our then… 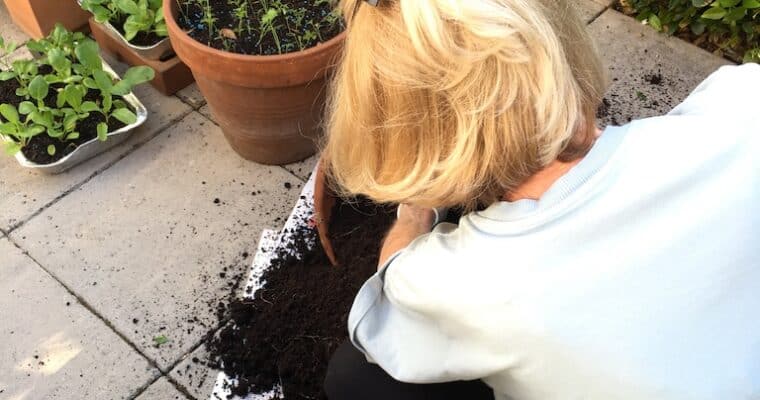 Sprucing up the Garden

After a year of lockdowns, it’s hardly surprising we’re looking to spruce up our outdoor living and entertaining areas. Your Garden: A Fifth Room Gardens have grown into an extension of our homes, with spaces set up for cooking, relaxing, and socialising. These include rugs,…

I’ll begin with some words of the designer Christian Dior, talking about our traditions here in Blighty …

“There is no other country in the world, besides my own, whose way of life I like so much. I love English traditions, English politeness, English architecture. I even love English cooking.”

Today saw the press conference for a very exciting exhibition on it’s way to the V&A Museum. Christian Dior’s name is synonymous with fashion and beauty and if you’re in London next year, then you’re in a for a huge treat.

It’s their biggest fashion exhibition since Alexander McQueen: Savage Beauty in 2015.   From 1947 to the present day, the exhibition traces the history and impact of one of the 20th century’s most influential couturiers, and the six artistic directors who have succeeded him, to explore the enduring influence of the fashion house

Based on the major exhibition Christian Dior: Couturier du Rêve it’s been reimagined for the V&A.  A brand-new section explores, for the first time, the designer’s fascination with British culture.

Dior admired the grandeur of the great houses and gardens of Britain, as well as British-designed ocean liners, including the Queen Mary. He also had a preference for Savile Row suits. His first UK fashion show took place at London’s Savoy Hotel, and in 1952 he established Christian Dior London.

I’ve become a little more inquisitive about Princess Margaret since being hooked on The Crown and the BBC’s wonderful series The Rebel Royal and she was a huge fan of Dior. In fact, a highlight will be the Christian Dior dress worn by Princess Margaret for her 21st birthday celebrations, generously on loan from the Museum of London following conservation work.

Royal photograph by Sir Cecil Beaton (1904 – 1980);[/caption]The exhibition highlights Dior’s total design vision, encompassing garments, accessories and fragrances. Flowers are emblematic of the Couture House and have inspired silhouettes, embroidery and prints, but also the launch of Miss Dior in 1947, the first fragrance created alongside the very first show.

From horticulture to global travel and 18th-century decorative arts, the show reveals the sources of inspiration that defined the House of Dior’s aesthetic. From the daring designs of Yves Saint Laurent to the rational style of Marc Bohan, the flamboyance of Gianfranco Ferré, the exuberance of John Galliano, the minimalism of Raf Simons, and Maria Grazia Chiuri’s feminist vision of fashion, the exhibition shows how each successive artistic director has stayed true to Dior’s vision of Haute Couture, while bringing their own creative sensibilities to the House.

Oriele Cullen, Fashion and Textiles Curator at the V&A

Oriole Cullen said: “In 1947, Christian Dior changed the face of fashion with his New Look, which redefined the female silhouette and reinvigorated the post-War Parisian fashion industry. The V&A recognised Dior’s important contribution to design history early-on in his career, acquiring his sketches and garments from the 1950s onwards. The influence of Christian Dior’s design was all-pervasive and helped to define an era.

In their own individual ways, each of the House’s successive artistic directors has referenced and reinterpreted Dior’s own designs and continued the legacy of the founder, ensuring that the House of Christian Dior is at the forefront of fashion today. More than seventy years after its founding, the V&A’s exhibition celebrates the enduring influence of the House of Dior and reveals Dior’s relationship with Britain.

Christian Dior offers an extended biography on Christian Dior (1905–57), from family life to his early career as a gallery owner and the founding of the House of Dior in 1946. It takes in Dior’s extensive travel, the global success of his couture house and the development of Dior perfumes.

The New Look focuses on Dior’s famed Bar Suit from his ground-breaking first collection in 1947 and considers how subsequent Dior designers have reinterpreted it over the years.

The Dior Line showcases ten defining looks made between 1947 and 1957, Christian Dior’s own tenure at the House.

Historicism examines the influence of historic dress and decorative arts in the House of Dior’s designs from 1947 to today, encompassing Dior’s love of the 18th century, and the Belle Époque fashions worn by his mother, Madeleine Dior.

Travels explore how travel and different countries and cultures have consistently inspired the various designers at the House of Dior.

The Garden highlights the importance of flowers and gardens as a source of inspiration to the House, from garments to perfume.

Designers for Dior spotlights the work of the subsequent six key artistic directors since Christian Dior’s death in 1957.

The Ateliers showcases toiles from the Dior Ateliers in a ‘cabinet of curiosity’ style installation.

Diorama examines the breadth of the House of Dior, from accessories including costume jewellery, hats, shoes and bags, to illustrations, miniature dresses and archive lipstick and perfume, bottles.

The Ballroom celebrates the fantasy of the Ball, evoking the lavish interiors of the great houses of Britain. It will showcase 70 years of stunning formal evening wear.

Christian Dior: Designer of Dreams is sponsored by Swarovski and will be in The Sainsbury Gallery.

Did you read 6 Must See Princess Diana Dresses?

From The Savoy to the Surreal 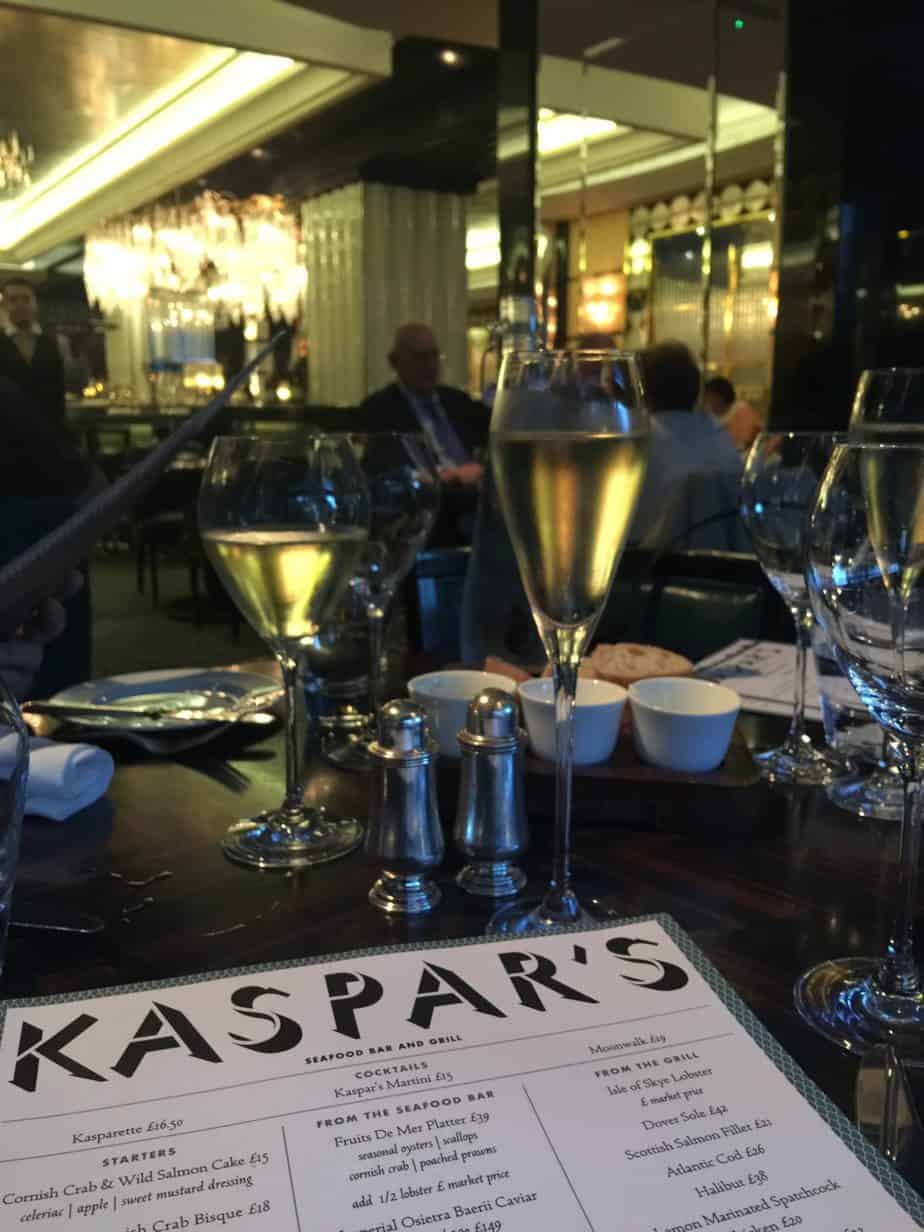 A Night Out At The Savoy Hotel

A night out at The Savoy Hotel mostly spent at Kaspar’s Seafood Restaurant.  We could have started the evening with a cocktail at the world-famous American Bar or ended our meal with a night cap in the art-deco Beaufort Bar … keep reading to find… 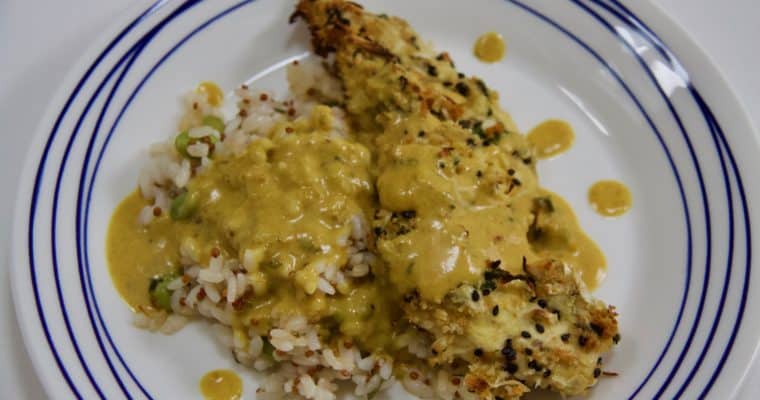 If you’ve ever tried to recreate a decent chicken katsu curry you’ll know the ingredients list is long .. chicken breasts, panko breadcrumbs, coriander, garlic, curry powder, buttermilk and that’s just the start. Katsu curry is a Japanese staple and traditionally made with pork.  I… 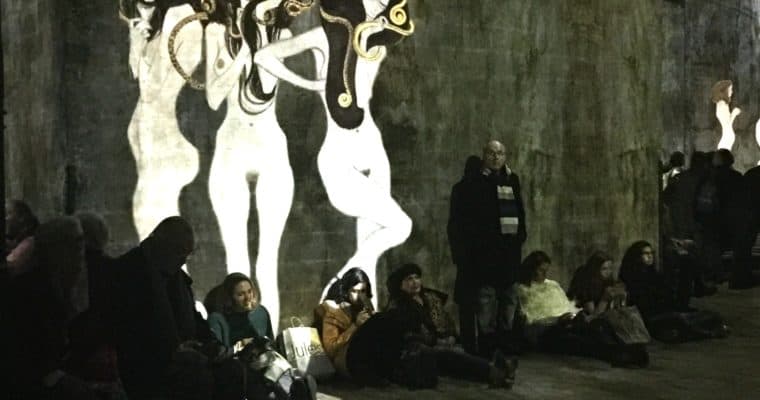 Name one of Gustav Klimt’s works and it’s sure to be The Kiss. Painted in the height of the Austrian artist’s golden period it’s one of his most memorable and reproduced. It’s an image of a couple kneeling in a patch of wildflowers, embracing. In…

CAN'T COOK? WANNA COOK? Learn to Cook in the UK 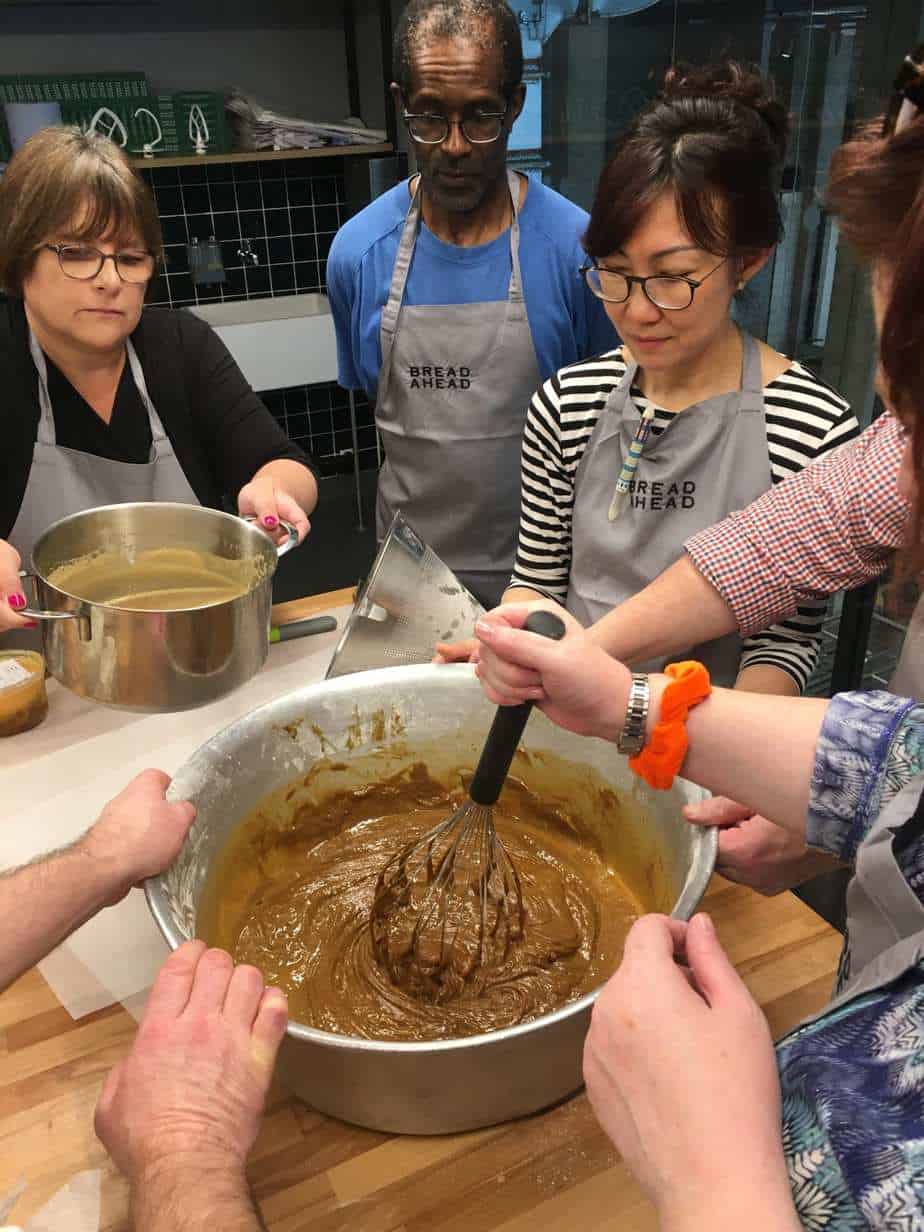 Christmas Baking at Bread Ahead is a magical thing. Their two new kitchens within the new Wembley store are vast. For those who are familiar with Bread Ahead’s courses, it’s the same communal learning set up. A large table is where students work, with the… 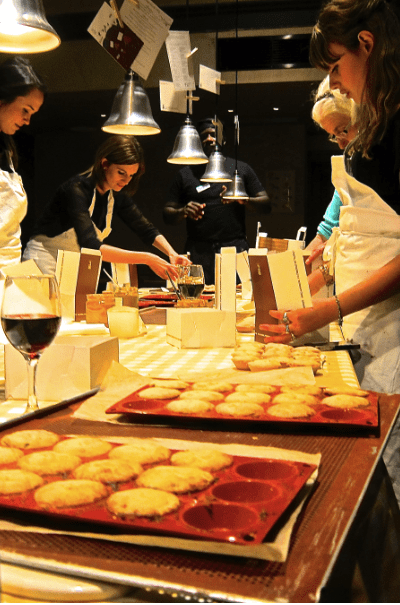 Le Pain Quotidien (luh-PAN-koh-TI-dyan) is a wonderful chain selling honest-to-goodness seasonal food as well as wonderful baked goods.  It began life in Brussels by a chef unimpressed with the bread on sale.  Alain Coumont began making his own, and fitted out his store with pieces of furniture from… 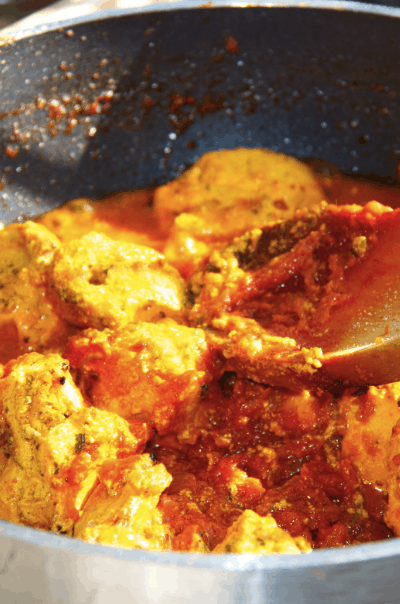 A restaurant by night and a cookery school by day at the weekend, the award-winning Brilliant Restaurant in Southall runs Punjabi cookery classes, accredited by the University of West London. At the helm is Dipna Anand. Her family hail from Kenya and have owned and… 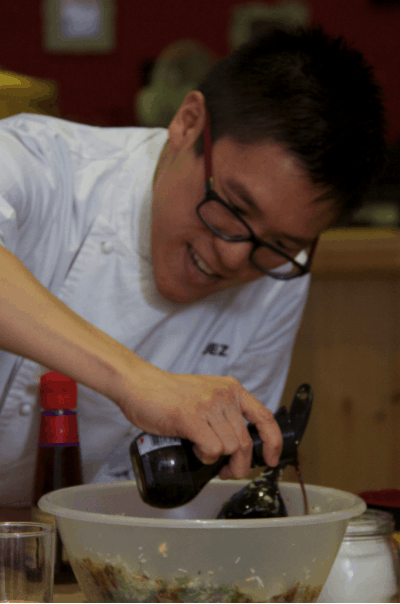 The set up in Jeremy Pang’s kitchen at the School of Wok is sure to make any chef or ambitious home cook green with envy.   He’s got high spec electric appliances from AEG which include a steam oven to make sure his buns are lovely and… 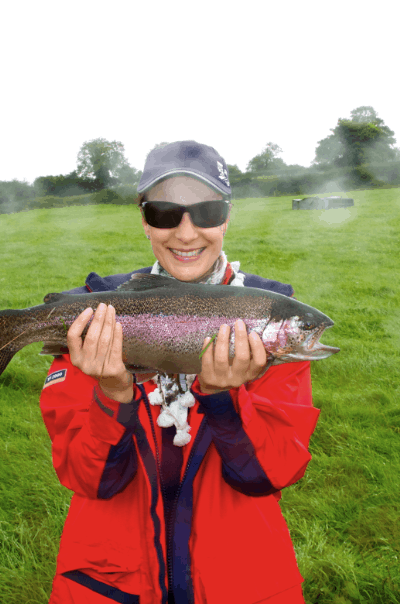 It’s only an hour and a half from London Paddington to Bath Spa on the train and Vale House Kitchen is a short taxi ride away in the pretty village of Timsbury.  This country skills and cookery school is offering punters the chance to learn fly fishing…