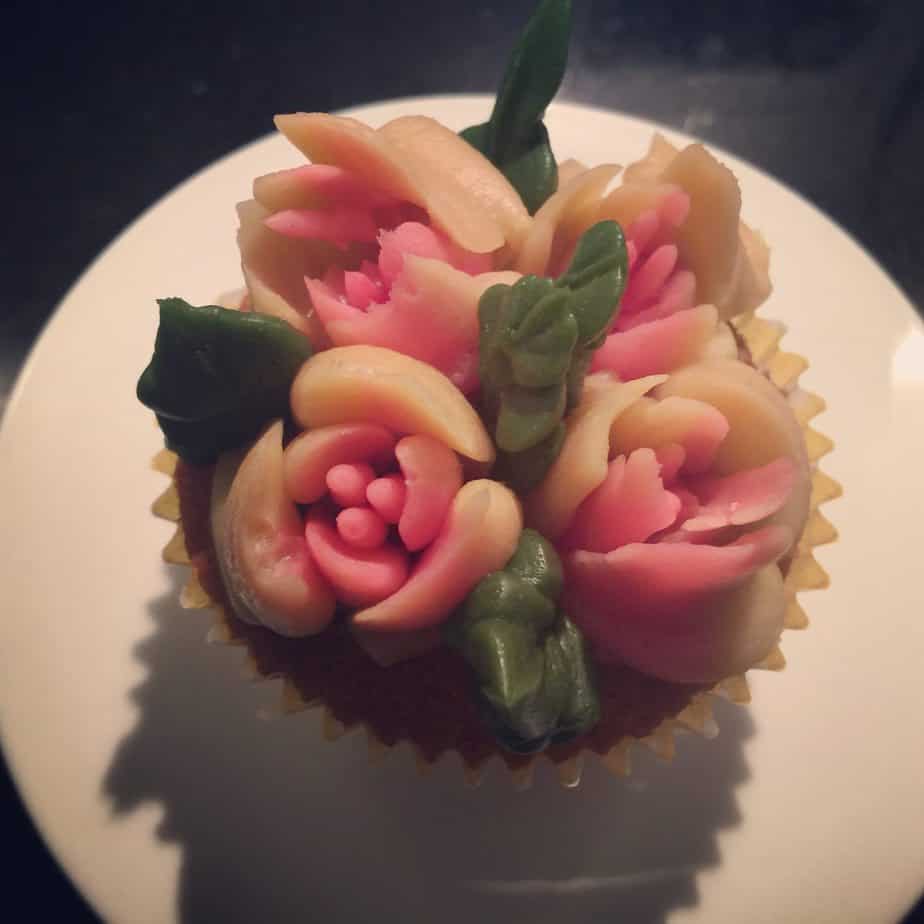 Decorating cakes is a skill I’ve never fully mastered so if there’s a corner to cut you have my attention.  Russian Piping Nozzles or Flower Piping Nozzles from Amazon are huge, in comparison to conventional piping nozzles and the ‘flowers’ they produce invade large areas on any cupcake or fairy cake.  They also look pretty impressive. I bought this set from Amazon.  It comes with a silicone piping bag, disposable piping bags, a coupler and a set of 13 Russian Tips. I’ve only tried a couple of nozzles, but my favourite has to be the rosebud. I added some foliage with a Wilton leaf nozzle number 352.

A regular buttercream 350g icing sugar/175g unsalted butter works perfectly well until the bag and icing start heating up and then the results aren’t great.  When it starts to show signs of softness, give it 5 or 10 minutes in the fridge. The icing has to be firm, not runny for some of the flower tips, especially those with fronds.  The idea is to pull up, not too quickly, and wiggle the bag to release the flower.

I’m sure meringue buttercream would work with a few of the nozzles but with a more confident hand.

A great tip for piping, if you want a two-tone buttercream or want to change your bag, is to roll the buttercream in cling wrap. Secure both ends like a sausage, snip the end going into the piping tip and slip straight into your piping bag.   Paint the cling wrap with a couple of stripes to add an extra depth to your flowers.   Pipe onto a piece of kitchen towel to get the flow started and keep it to hand to remove any failed splurges.   These can be easily lifted off with a knife and set aside. This takes time.  Practice and practice before you let yourself loose on the cupcakes. Some ice a layer of buttercream on top of the cake but it’s quite a lot to digest so I just leave mine with a sponge top.  It really does depend on the look you’re going for. Don’t expect to master these tips immediately, it takes a little practice, but you will get the hang of it. I piped a fair few cupcakes and I was pretty pleased with my first attempt.

How are your piping skills? Have you got any flower nozzles or particular skills to share when it comes to icing?  I’d love to hear from you.