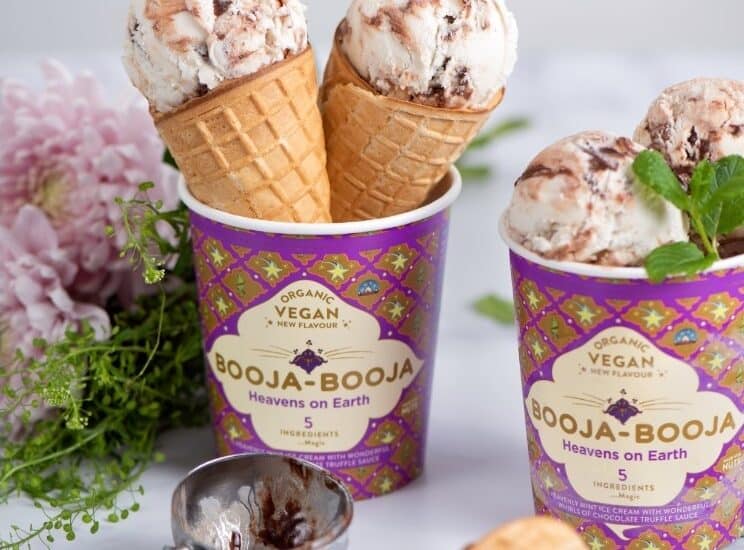 OK. OK. Booja-Booja vegan ice cream wouldn’t usually be on my radar but I welcome all readers here, regardless of diet. It’s really rather good and for dairy-lovers (unless you’ve got the finest palate known to man) you won’t realise (until you read the side of the pot) that the luxuriant cream-ingredient is in fact cashew nut. Clever.

Booja-Booja are a brand that came to my attention when I was given a box of their truffles (hazelnut if memory serves me well). These ‘luxurious bites of wonderful’ are not only organic they boast a pretty impressive ingredients deck and are dairy, gluten and soya-free.

I bet you’re wondering what Booja-Booja actually means? Well, the company claims that Booja-Booja is the feeling, the sound that flows with the first bite … and the following is stolen from their website.

With that in mind … imagine how good their ice cream is. To add to their range of seven flavours and after months of development at their Norfolk HQ they’ve made an eighth – mint chocolate truffle delight, appropriately called Heavens on Earth.

Waitrose will be stocking the new flavour, alongside the two they already stock Caramel Pecan Praline and Chocolate Salted Caramel. Is your mouth watering yet?

The company have 42 awards for their ice creams and were voted Best Vegan Ice Cream maker at the Vegfest UK Awards for the past three years. And, people, ‘disclaimer alert’ – they’ve also won 10 Great Taste Awards. Of course, as you know it’s blind-taste judging but there are always great ice creams when I judge.

Waitrose aren’t the only stockists, keep your eyes peeled for the flavours in Holland and Barrett and online at Ocado. I’m almost sure I’ve seen it in London branches of Whole Foods too. The RRP is £5.49 for 500ml.

Not vegan but Venchi gelato is one of my favourites, here’s why.

Do you have an ice cream, sorbet or gelato that’s your go to?