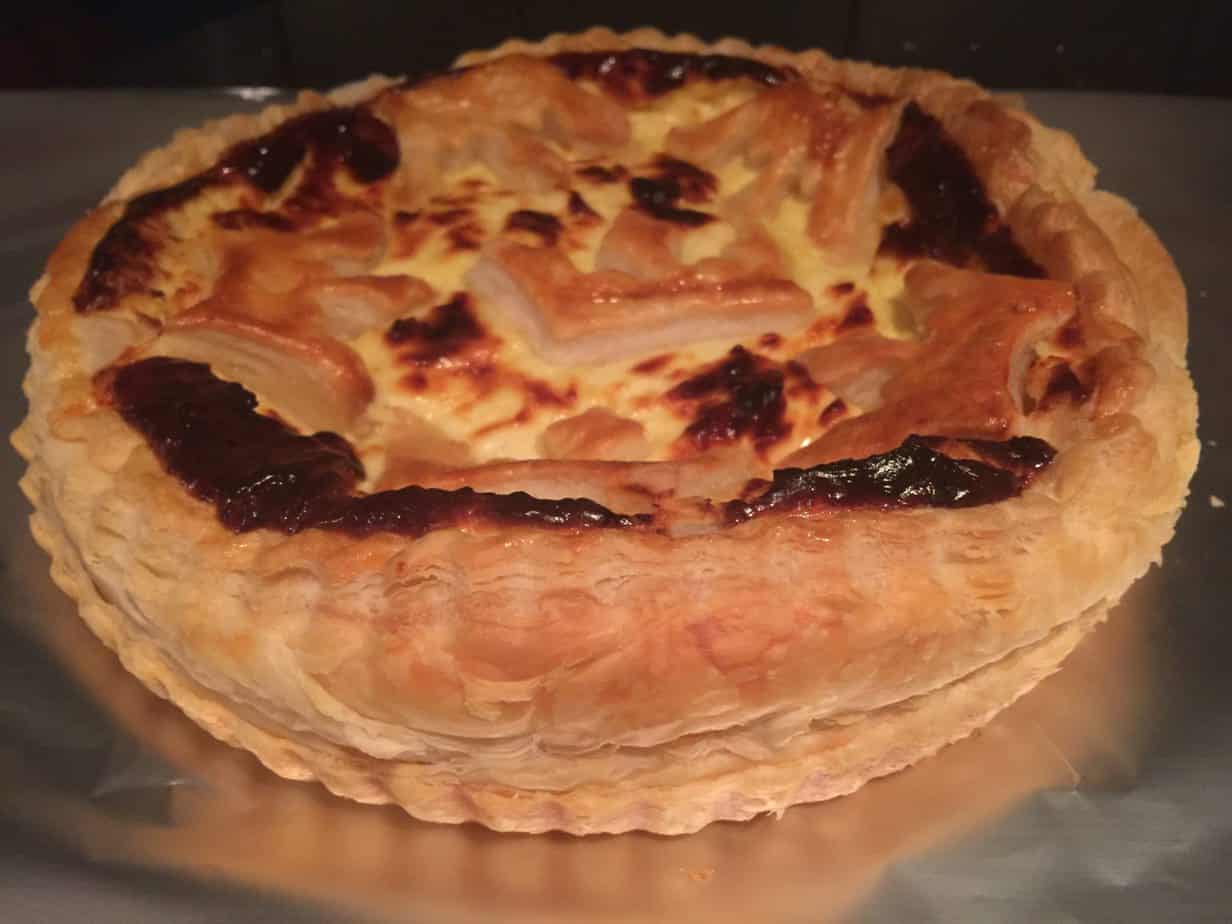 This Tudor Cheese tart recipe is remarkably easy to make and has so much more taste than I imagined.  It’s a result of a course I signed up for run jointly by University of Reading and Historic Royal Palaces. It’s called ‘A History of Royal Food and Feasting’.   The course will take place over a period of five weeks, each taking up three hours a week, will showcase the power and wealth through five generations of royalty and their Palaces.   I’ve just completed Week 1 which focuses on Hampton Court and Henry VIII.  Part of the coursework is exploring Tudor Food, and thankfully someone’s converted the English ingredients so I can make it and share the recipe and images with you.

I appreciate it’s nowhere near Lent, but this cheese tart contains all the things forbidden during the period – cheese, cream and eggs, encased in pastry.

‘Take neshe chese and pare hit and grynd hit yn A morter and breke egges and do ther to and then put yn buttur and creme and mell all well to gethur put not to moche butter ther yn if the chese be fatte make A coffyn of dowe and close hit a bove with dowe and collor hit a bove with the yolkes of eggs and bake hit well and serue hit furth.’

Adapting the recipe for modern use.

Chop and pound cheese in a mortar.
With the modern technology available in my kitchen, I cheated and used a grater and a food processor.

Interesting Fact Alert: Men cooked and served in a Royal Household, or in most cases, any noble household, for three main reasons. Only having male staff living on site removes all relationship problems; large scale kitchen work is hard and heavy; and it shows that the head of the household is a man above all men, served by men. If a mixed staff served the nobleman, then he would be the same as a merchant in the city.

Add the other ingredients and make a spreadable paste. Make a pastry tart case, about 25cm (10″) diameter, you can use a pie tin if easier, and thin pastry lid. I made a few crowns to top the cheese mixture, but you can make a full pastry lid.  Fill the case with cheese, cream, egg and butter mixture, then put on the pastry lid (or motifs) seal and glaze with egg. You could use any pre-1600 variety of cheese, such as Cheshire, Wensleydale, Roquefort, Gorgonzola, Parmesan, or Cheddar, but the original probably used curd cheese (the recipe specifies it should be neshe – soft), so ricotta or quark would also work well. The egg stops it curdling.

I wasn’t expecting this Tudor Cheese Tart to be quite so tasty and so I’ll try another, next time with shortcrust pastry.

Thanks to Future Learn who offer hundreds of free online courses from top universities and specialist organisations.