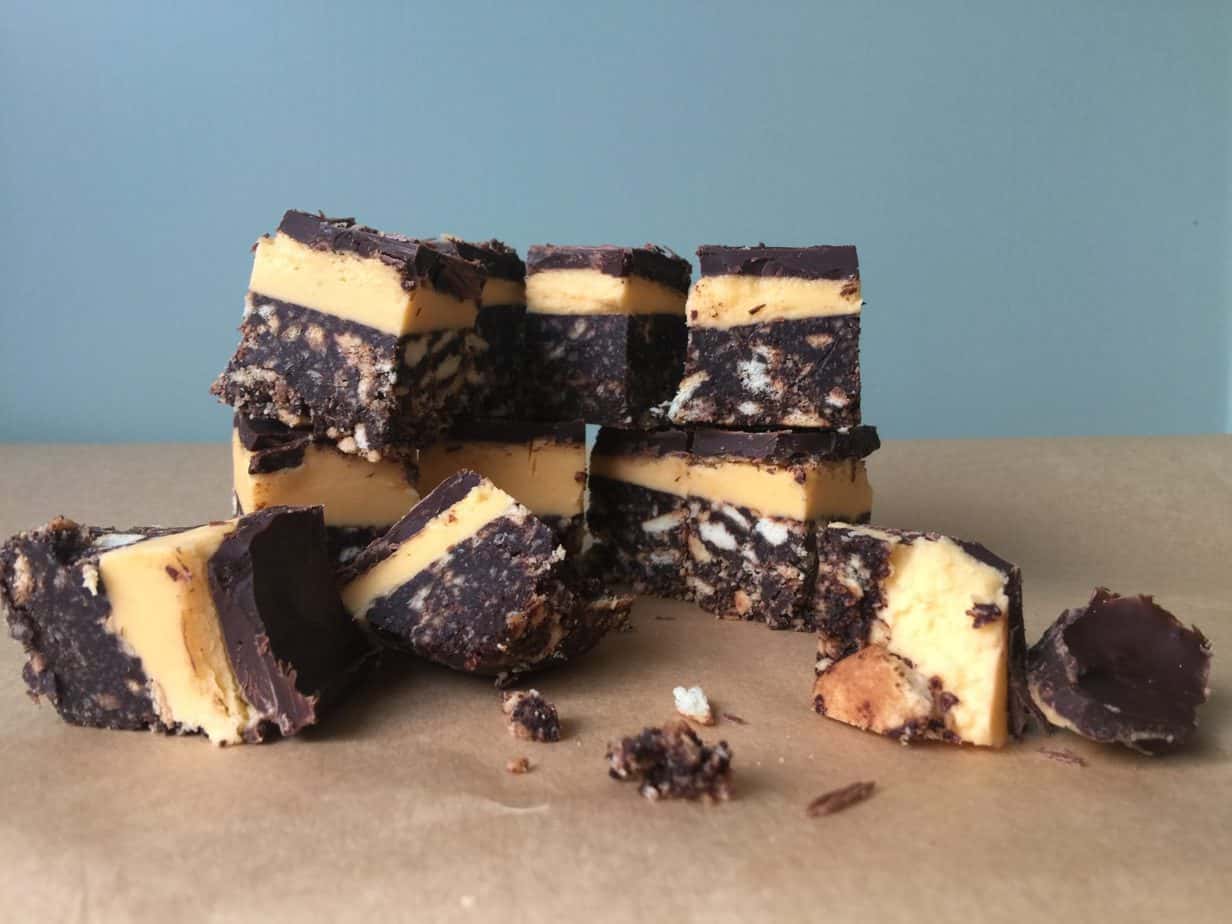 The Nanaimo Bar is named after the city of Nanaimo on Vancouver Island.  This moreish, no-bake bar has a biscuit base, topped with a custard layer then a crisp chocolate top. They’re delicious but don’t take my word for it, the Canadians voted the bar their favourite confectionery.

The first printed copy of the recipe using the name Nanaimo is found in Edith Adams’ cookbook in 1953.  Edith was a fictitious newspaper food writer for the Vancouver Sun who doled out homemaker advice to its readers.  If a reader got their recipe printed, they’d be sent a dollar and it would appear that Lenore Newman wrote the recipe published in the paper but under the title London Fog Bar.  It seems since then there have been quite a few reincarnations but all closely match the original recipe.

Canada is celebrating its 150th year and so it seems the perfect time to whip up a tray of Nanaimo Bars and scoff for Canada.

Here’s a recipe I got given from a Whistler resident.

For the biscuit layer

For the custard layer

Begin by making the biscuit base

In a bowl, over a pan of simmering water, melt the butter with the sugar and cocoa powder, stirring occasionally until smooth. I always microwave mine, 600W for about a minute and a half, keeping a very close eye on it. Whisk in the egg until the mixture has thickened. Remove from the heat and mix in the biscuit crumbs, coconut and chopped walnuts if using, then press into the base of a lined 20cm square tin. Chill for 10 mins.

Then the custard layer

Whisk together the butter, milk and custard powder until light and fluffy, then gradually add the icing sugar until fully mixed. Spread over the biscuit layer and chill in the fridge for at least 10 mins until the custard is no longer soft.

Melt the chocolate and butter together in the microwave (or over a pan of simmering water), then spread over the chilled bars and put back in the fridge. Leave until the chocolate has fully set. Take the mixture out of the tin and slice into bite-sized squares. They will keep in an airtight tin for up to a week but don’t expect them to hang around that long.