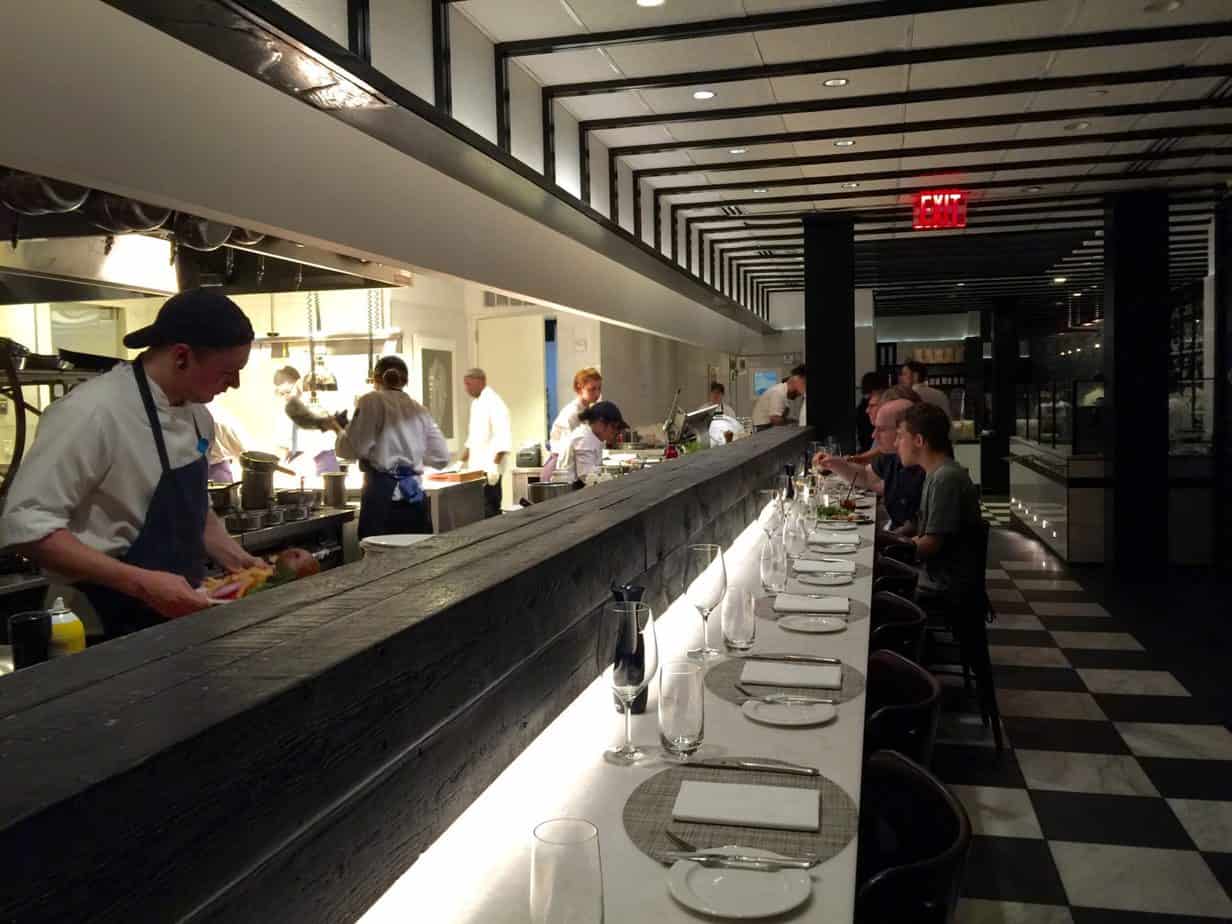 I love social media.  Mr is consistently condemning it as a waste of time, but he doesn’t get it.  I do.  And I’m glad I do because that’s how I met Eric Korsh; Virtually, via Instagram (@ekorshie & @holdtheanchoviesplease).  For those who don’t know what this is, it’s an application that allows you to post pictures of anything you like; mine’s mostly food and lovely buildings or places I’m visiting.  If fellow Instagrammers like what you post they follow you and likewise.  Eric is a chef.  A bloody good one and runs the kitchen at Danny Meyer’s North End Grill.

I threatened to visit some time ago and made that threat very real when I booked tickets to New York for my birthday in August.  Little did I know I’d visit when the place was in the middle of a heatwave, so booking to visit a restaurant with an open kitchen where mesquite charcoal and white oak fires up Josper ovens and wood grills was probably not the best idea I’ve ever had.

NEG is inside the swanky Conrad, located in the heart of Battery Park City, close to the World Trade Center Memorial and Eric brings a little French sophistication to a grill menu. It’s also a non-tipping restaurant which means service is included in the price of your food, quite a rarity for the City.

There’s a raw bar features some fabulous options including iced oysters ($4/each) from the waters around Massachusetts; Crowes Pasture and Peter’s Point, which turned out to be a smaller, sweeter offering.   Served with a simple chilli jam and a classic Mignonette.

The oyster brine was divine, and I could imagine it enhancing a Gin and Vermouth mix to make the perfect Martini.

Appetisers included Zucchini (courgette) carpaccio ($15),  Beef Carpaccio ($21), Zebra tomatoes from the Hotel’s rooftop ($15) and Lettuces with Feta, green onion and a dill vinaigrette ($18).  Not a fan of cold soup, the white gazpacho was grape-based and within it sat a quenelle of beautifully fresh cucumber sorbet, a sprinkle of Spanish Marcona almonds finished this excellent starter ($18).

Another winner was a cold pork terrine.  A clean, well-flavoured jelly surrounded a rustic, pistachio-studded meat.   It came with pickled red cauliflower, sweet baby cornichons and a couple of mustards, along with an angled slice of grilled sourdough.

Now, the sourdough is worth a blog on its own.  It had just the right amount of sour notes with a great malted treacle crust, utterly dangerous with the slightly salted butter.

The hero of the meal had to be the dry-aged strip steak with charred spring onions, rosemary and garlic.  Cooked on an open grill, perfectly charred on the outside and medium rare within.

There are choices of snacks, charcuterie (expect French bistro classics), cheese (which includes American, French and Swiss) and sides including Summer Succotash with pickled peppers ($16) which were beautifully vibrant and full of sweet and sour flavours.

Drinks included cocktails, this the Emerald City with Gin, Cucumber, Basil and Lime ($18).

There are virgin cocktails, an excellent wine list, including those by the glass.  There’s also a varied selection of New York draft and bottled beer.

If there were a dessert menu.  I’m certain there is.  We were too full even to begin to read it.

Stumptown Coffee is by far one of the best roasters in New York.  They have a station in NEG dedicated to the art of coffee-making.

I loved everything about the evening; meeting Eric was a huge honour.  The food from his menu, the relaxed atmosphere and the service were all brilliant. I’ll be recommending it, and I know Mr definitely will.