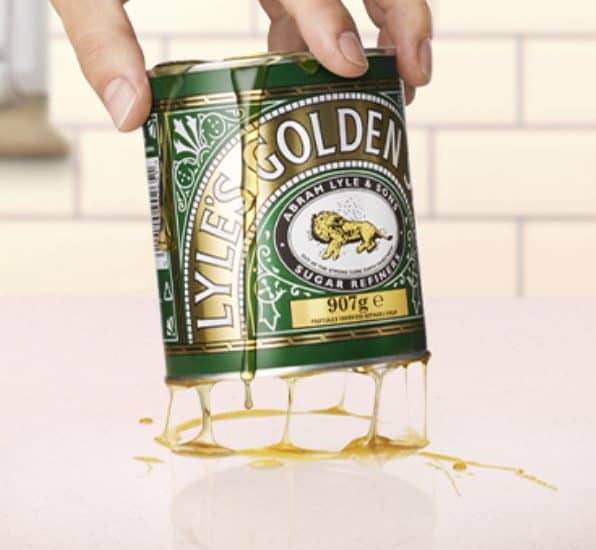 Did you know there were any factories left in London, let alone one that makes syrup?  Step forward the purveyor of the thick golden stuff Tate & Lyle who do … in the wastelands of east London.

It’s the time of year when food writers wheel out as many ‘flipping’ clichés as their copy, and conscience, will allow.

Shrove Tuesday or Pancake Day is the first day of the season of fasting and prayer or Lent.

Back in the day, the idea was to use up rich ingredients –eggs, sugar and flour – before a forty day abstinence kicked in.  Made from a batter and fried in fat, the ingredients symbolise four crucial points of significance.  Eggs for creation, flour for the staff of life, salt for wholesomeness and milk for purity.

These days unless you’re religious, have kids, a decent calendar or trip over the promotional display in the supermarket, Pancake Day will probably pass you by.   Well dear reader, not this year – not if I have my way.

A basic pancake batter is probably one of the easiest things you’ll ever make – no real technical skill or equipment needed.  You can make savoury but because I’ve got the sweetest tooth in the capital I’m going for dessert pancakes.   Which brings me nicely on to my favourite topping.

It’s a glorious, gloopy, wasp-attracting jaw-sticking, toffee-tasting nectar and it’s a staple ingredient for flapjacks and goes very well in a steamed pudding.  There is no better than glorious ribbons of golden syrup free-falling onto a pancake.  If it’s good enough for Her Royal Highness then it’s good enough for me.   As I prized off the lid to the all familiar gold and green tin I wondered where and how it’s made?

Well, for 128 years they’ve been making it in Plaistow so of course, I had to get myself a visit to the factory I had no idea existed.  Ian Clark’s in charge of the site and he’s something of a syrup-aficionado.  I get the full tour, feeling more than a little privileged knowing that the factory is not open to the public.

Cue rivers of flowing gold accompanied by something soothing by Debussy.  Scratch that.  There are no huge open vats being worked on by hair-netted white booted workers. This is a closed production site.  A series of pretty clever machines do the job.  The tins are made on the premises from scratch, given a base, sent through a sorting machine which checks for leaks.

They’re sent through to a machine which fills them with syrup, they’re packed and put on pallets and dispatched all around the world.

But how do they do it?  Well, the sugar molecules are continually refined throughout the process – the sucrose molecule splits in half to give glucose and fructose sugars.  This inverted syrup is blended back with the original syrup to give a partially inverted syrup.  The final blend of sucrose, glucose and fructose allows the syrup to be thick without crystallising.

I was allowed to sample every syrup flavour from squeezy chocolate to maple syrup.  How I left that place without sending myself into a diabetic coma is beyond me.

Thank you to the Factory Site Manager, Ian Clark for his time and patience and to the well-organised team at Epicurus.

You may hate syrup and if you do you can’t beat fresh lemon and caster sugar.  A guilty pleasure of mine, which harks back to my childhood ‘Little Chef hankerings’,  is cherry pie filling with ice cream.

Try making your own pancakes.  You could buckle and buy the just-add-water-can’t-be-bothered- shake-to-make pancake mix but making your own will be tastier and a lot cheaper.

Have you ever tried Tottenham Cake?